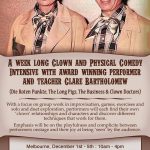 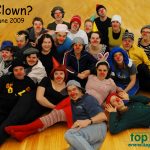 They offer workshops on the following:

Song writing for character and clown

Clare has been teaching workshops in clown, physical comedy and improvisation for over eighteen years.

She has taught clown master classes and performance independently and for; Circus Oz  - most recently for their Indigenous training program, Blakrobatics. She has run clown master classes for Tricklock Theatre in Albuquerque, USA and for Atomic Vaudeville in Victoria, BC Canada.

In 2015 /16 she was the guest clown and vaudeville teacher at The John Bolton Theatre School in Melbourne.